ARTWORK OF THE MONTH

A Throw of the Dice, 1900, Lithograph by Odilon Redon

Paired with Profile of a Woman with a Vase of Flowers, c. 1895-1905, Oil on canvas by Odilon Redon in Works from Tate into The Garman Ryan Collection 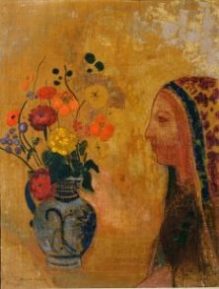 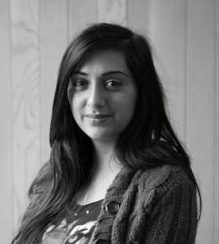 Odilon Redon (1840-1916) was a Symbolist painter and printmaker, born in Bordeaux, France. Despite never identifying himself as belonging to any symbolist literary or artistic group he became known as one of the principal symbolist artists of his time.

Redon’s work can be divided into two distinctive periods, pre 1894 and post 1894. The lithographs Redon produced during the 1880s and 1890s contain some of his most haunting images and for much of his career he worked largely in black and white, believing that it communicated directly, without the distraction of colour. After 1894 he overcame his neuroses and his art blossomed into radiant colour and joyful subject matter. He moved from producing predominately monochromatic prints and drawings to using pastels and introducing new motifs such as flowers into his work.

I have chosen Odilon Redon’s lithograph A Throw of The Dice as the Gallery’s Artwork of the Month for June, which has been paired with his Profile of a Woman with a Vase of Flowers, an oil on canvas from the Tate Collection.

Redon’s early small-scale black and white drawings and prints had neurotic introspective subject matter which stimulated the imagination of his viewers. His work was deeply reflective of symbolist art where the subject is suggested rather than directly explained, a reaction against realism in favour of spirituality, imagination and dreams. After delving into Redon’s life I feel we can relate a lot of his early work to his classic Freudian unhappy childhood.

As a young child Redon suffered from epilepsy and this is thought to have been the reason he was sent to live on a rural wine estate with his uncle, spending eleven years separated from his parents and siblings, left to his own devices in isolation. His recollections suggest that this time was spent daydreaming, often feeling  sad and weak. His loneliness caused him to turn inward and he drew inspiration from his imagination; his inner mind rather than the outer eye.

In 1851 Redon returned to his parents and at age fifteen was allowed to take drawing classes with watercolourist Stanislas Gorin. It was Gorin who first took the young Redon to exhibitions; however it was his father who steered Redon towards the realms of the imaginary. “My father often used to say to me: ‘Look at those clouds, can you see the changing shapes in them?’ And then he would show me strange beings, fabulous and supernatural visions.” In 1865 Redon met Rudolphe Bresdin who taught him etching and lithography and also opened his eyes further to the world of the imagination. Redon began using black consistently in 1875, however he rarely dated his work and dates

of execution were never easy to establish. In 1879 he published a first sequence of lithographs.

In the 1890s a fundamental change occurred in Redon’s practice. Just as Redon’s childhood and early life experiences influenced his use of only the colour black for most of his life, it was the changes later in life that influenced the introduction of colour into his work. It was as if the black period had allowed Redon to come to terms with his past and his new life experiences were introducing him to a world full of joy and beauty.

In May 1880 Redon married CamilleFalte, a young creole woman from Bourbon Island and six years later their first child Jean was born, but unfortunately he died six months later. This was a very emotional and tragic period in Redon’s life and almost certainly plummeted him further into the darkness. However two and a half years later Redon was blessed with the birth of his second child Ari and it was shortly after this that colour entered Redon’s work.“It is too beautiful!” Redon wrote to his mother. Years of mourning had been dispelled and Redon was now seeing the light.

“With my eyes more widely opened upon things. I learnt how the life that we unfold can also reveal

It was this light that would influence Redon to produce beautiful paintings for the last twenty-six years of his life.

A Throw of the Dice and Profile of a Woman with a vase of Flowers were both produced around the same period during this change in Redon’s practice. Redon often began his drawings with random mark-making then adapting this into an image, a technique known as automotive drawing, adopted by the Surrealists.

for a poem by key Symbolist writer Mallarmé. The exact date for Profile of a Woman with a Vase of Flowers is unknown, but it is thought to have been produced between 1895 and 1905. Both these works are very different yet at the same time very similar.

A Throw of the Dice is a lithograph in black and still features symbols of darkness, the imaginary and

to some extent Redon’s past. For example Redon borrowed symbolism from religious traditions, including the occult, a mystical theory about ‘larvae’ products of the imagination which can prey upon their creator. This is expressed in A Throw of the Dice where a strange creature seems to be resting on the head of the woman. Severed heads frequently appeared in the black works, often seen floating in bubbles, drifting or simply resting. The immobility of these heads might be a reference to Redon’s enforced immobility as a child, away from his family seeking solace in his dreams. Perhaps this is what Redon is expressing in A Throw of the Dice?

On the other hand the Profile of a Woman with a Vase of Flowers is a beautiful oil painting with colourful flowers, a new motif which we know Redon introduced into his later works. The motif of a woman with flowers is expressive of a harmony between nature and the human soul. Redon seems to equate flowers with beauty and more often than not he depicts flowers alongside girls or women.

Flowers also allowed Redon to explore the power of colour, something he consciously rejected throughout much of his early career. His still-life paintings and pastels of fl owers clearly enabled him to use many different colours, seeing the contrast and eff ects they achieved. This work effortlessly communicates a sense of space and freedom. I suspect a symbol of Redon’s own found freedom when he came into the light. This is very different to the immobility we can feel with the woman in A Throw of the Dice. It is as if she is being tied down with the weight of this creature resting on her head invading her mind.
Despite the differences that I have mentioned, both works are quite similar in the sense that both have this dreamlike and mysterious quality, typical Symbolist characteristics. The woman with the exotic headdress in Profile of a Woman with a Vase of Flowers adds to this mysterious quality as there is no mention of who she is or where she is from. An earlier work called Sita (c.1893, in the collection of the Art Institute Chicago) shows Redon was very interested in the exotic, particularly India and this may have influenced this painting. Both works also show the women in profile, a characteristic that was common in Redon’s work. His depiction of women in this way may have been influenced by early Italian Renaissance portraiture.
Once he started using colour Redon would never turn back. The darkness he felt when he was abandoned as a child was dispelled when he became a husband and father. The demons had been driven away, and in the final years of his career the oils and especially the large pastels he produced became increasingly shimmering, designed to surprise the eyes and delight the heart.

Elsewhere in the gallery:

Works from Tate into The Garman Ryan Collection

The University of Wolverhampton: Inspiring Teachers