In response to the Coronavirus pandemic, The New Art Gallery Walsall initiated a series of remote residencies to support artists to produce work from their homes. Departing from the Gallery’s usual emphasis on making and sharing work within the context of the Gallery’s purpose-built studio space, artists were encouraged to find creative approaches to developing their practice amid imposed national restrictions and, in particular, to explore the benefits and possibilities of engaging with an online audience.

Following an open-call to artists based in the West Midlands, the Gallery supported three artists with month-long opportunities between May and July 2020 and ongoing curatorial guidance. The selected artists were Farwa Moledina, Faye Claridge and Antonio Roberts.

Foregrounding new perspectives and family relationships at a time of global lockdown.

Faye is a socially-engaged artist who frequently works with collections and communities.  Since lockdown, like many artist-parents and those with caring responsibilities, she has felt under strain to negotiate a meaningful way to deal with the specific context of the current situation creatively, whilst balancing the practical and mental demands of home schooling and childcare.

For her residency, Faye will adapt her usual practice of pairing collections and participants by inviting selected parent-artists to work with the child(ren) they live with and care for. Each child will select an artwork by their parent and make something inspired by it, empowering children to respond to their parent’s work directly, possibly for the first time. The resulting paired works (the artist’s original and the child’s response to, or representation of, their parent’s work) will be shared on the Gallery’s website and social media platforms as an evolving online series during the residency, giving audiences a new perspective on the work of the involved artists. Through the project Faye hopes to open up a dialogue around the parent-child-homeworking relationship during lockdown and provide space to reassess assumptions around artistic practice and family relationships. Her residency will offer an essential network of support for the participating artists and others during lockdown.

Here Faye introduces the work of participating artist-parents and the creative responses produced by their children during lockdown:

Jo Gane works with archives to explore the idea of the photograph as a two-dimensional slice of history, functioning in relation to the progression of time. She said 6-year-old Stanley’s first creative response to her work for this project was a drawing. 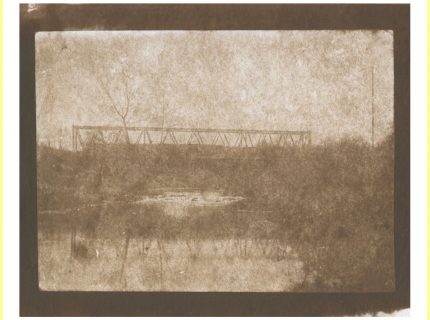 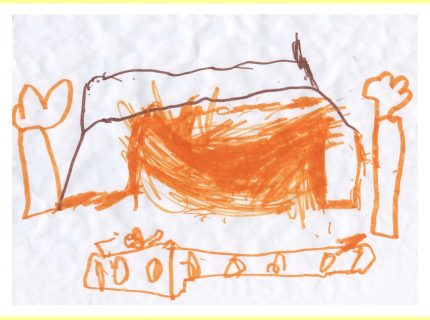 “It’s interesting to see that the image of the bridge, which stuck with me when researching Shaw and Henshaw’s landscapes had also stuck in his mind… [drawn] purely from his memory.” 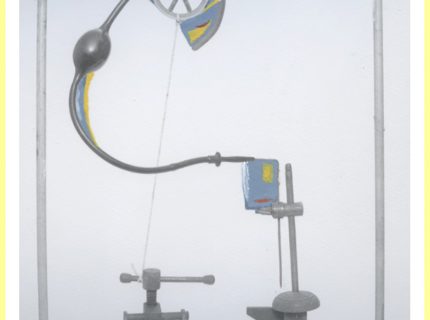 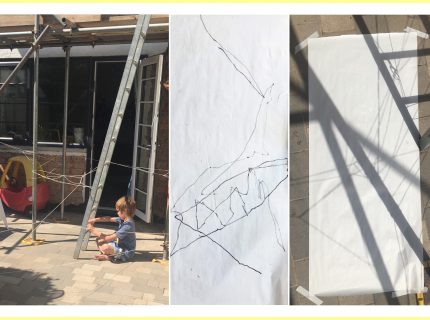 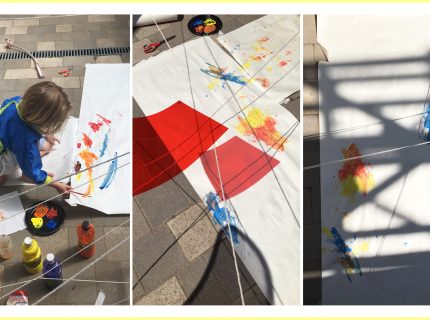 Stanley and sister Minnie (aged 3) also looked at Jo’s prints and paintings inspired by machines made by Coventry artist and engineer Julian Henry Beck, eventually creating shadows with scaffolding and string to reinterpret the works. Stanley said: “I like the way they move, in my imagination.”

Ben Sadler is half of duo Juneau Projects, who work collaboratively with other people on themes around society and the natural world. Ben’s home-schooling seven-year-old daughter Hazel during lockdown and incorporated this project into their school work. He said:

“We had a look at images of the Juneau Projects work in Walsall’s collection on their website. Hazel then decided she wanted to make a customized object that she could use, but not something for being on stage with, like the objects we made, so she decided to customize a bag that she could carry around with her when we go for walks.” 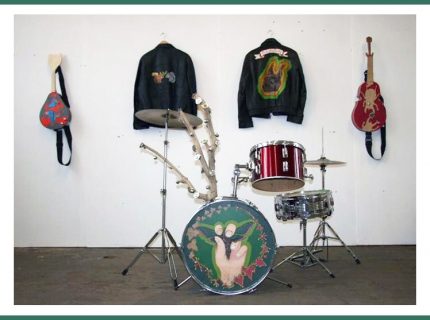 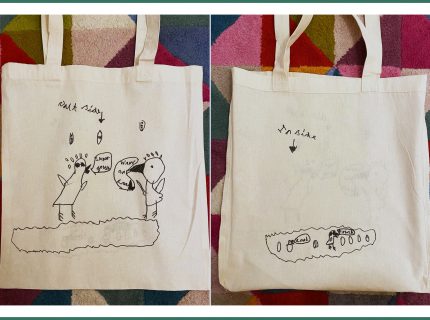 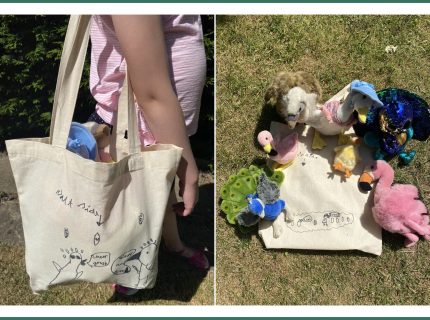 “I like Daddy and Phil’s instruments and jackets but I didn’t want to do it on an instrument or a jacket so I decided to do a bag. I did it based on the pigeon Phil used.

Mark Titchner is well-known for his use of language in public spaces and the 2006 Turner Prize nominee’s Please Believe These Days Will Pass poster has become an iconic image within the UK’s Covid-19 pandemic. Appropriately, it was this piece that his daughter Rosa, age 5, wanted to paint over for her work. She said:

“I painted around the letters, put some dots on the words and wrote my name at the bottom. I think the words are about when the germs will go away. Go away germs!”

Mark added: “She’s put it up in her bedroom with her other drawings. She liked writing her signature over the top of mine!” 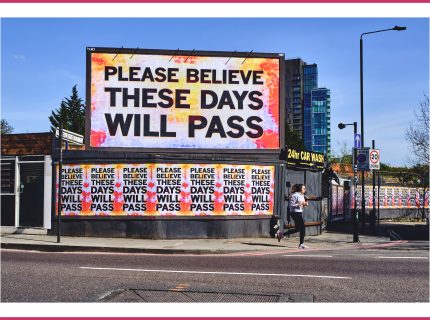 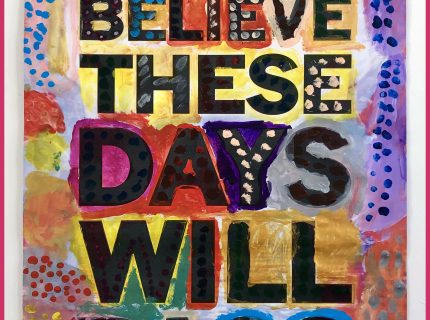 Ellis, age 9, chose one of his father’s works that “looked like it was moving”. Ellis said:

“I wanted to make something that looked like it was moving too. Mine looks like a load of snakes because of the colour. It says ‘Inc, Inc the bed’ because in Minecraft I play a game called Bed Wars with my friend where you have to destroy the other players’ beds. When someone’s coming we say ‘inc, inc the bed’ which means ‘incoming, incoming, guard the bed.’” 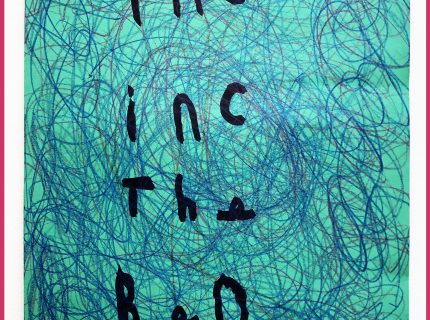 Andrew Tift is a realist portrait artist, known for winning the Portrait Award, the BP Travel Award and for numerous commissions including work for the House of Lords. During lockdown he’s home-schooling his eight-year-old, which “is taking a huge chunk of working time”. He commented on this project working with his daughter, Scarlett:

“She loves drawing and painting and [her work] actually turned in to a self-portrait of her as a baby. This was [based on] the first painting that I made of her and she wanted to do this one. I made the portrait of Scarlett because I thought it was quite a striking depiction of her as a baby, without sentimentality. Interestingly, babies have no image to project at this young age because there are no learned ways of projecting and behaving, rather like animals, so you get a very pure portrait. I saw a baby looking in wonderment at the world.” 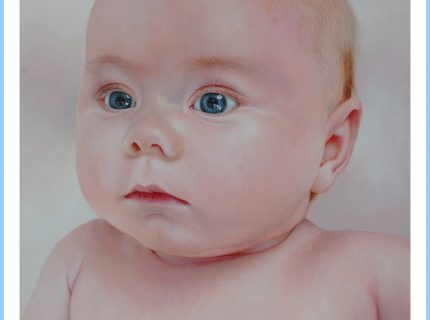 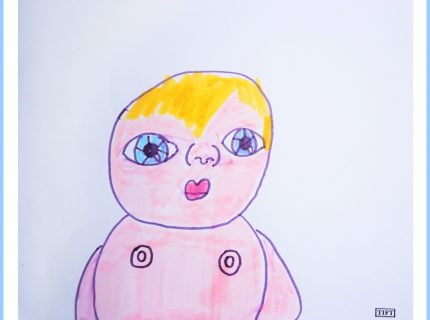 I often work with people of all ages and in multiple situations to foster responses and have occasionally included my children, but until this project we’d never fully discussed the concepts behind my work. After looking and discussing together, my boys’ immediate responses were performative and playful and they were definite they wanted to work together.

They quickly devised a plan to recreate the bridge from Weighty Friend  with their bodies, surprisingly putting themselves at the centre of the interpretation, literally embodying their ideas. Emmett, age 11, said:

“We wanted to show that art is fun to interact with and isn’t just something you can say ‘yeah, I’ve just looked at that’ to”. 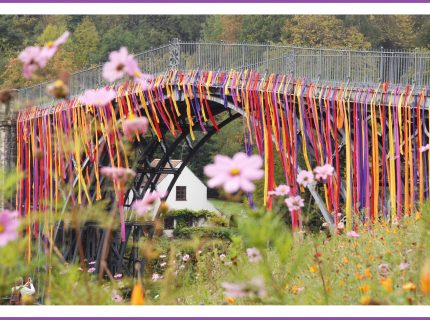 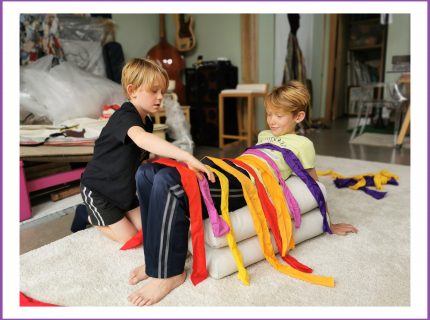 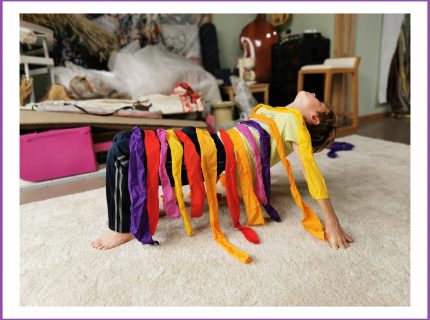 Rowan, age 8, said looking at my work was interesting because:

“For all of the things there was a meaning, there was always something about why it was weird, or why it looked especially like that and listening to the stories of them being made I realised there’s a lot of thinking in them.”

Hannah Maybank is best known for the ripped and distressed surfaces of her paintings that reference flora. Her work explores decay and renewal, using paint, repetition and reaction. Her 5-year-old son Samuel decided to choose a painting of hers to react to at random by spinning around the studio with arms outstretched as pointers. He said:

“I am going to do a huge drawing and painting in a huge piece of paper. And then take it home to decorate my bedroom with as I don’t like plain walls.”

He drew “floating clouds like your floating peonies mummy” and then decided to change them into “alien planets that don’t exist. It was Mars now it has been split into six red planets by an alien gun. You can still see the lines through the red paint.” 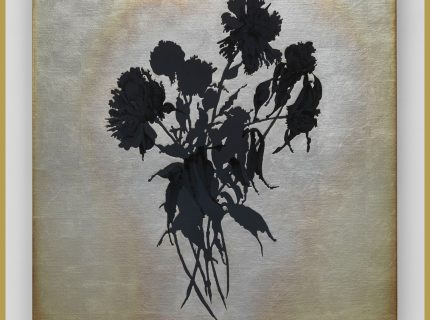 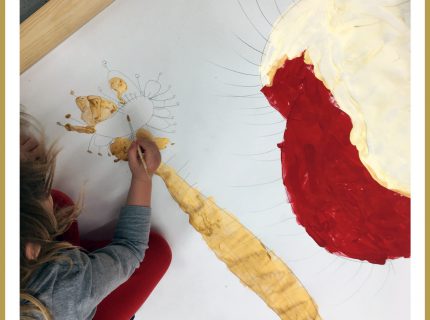 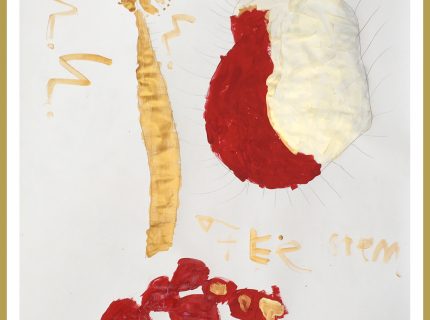 Samuel mused: “I’m adding a bit of imagination to this painting. Do you use your imagination too mummy when you paint?”. He then said: “I have painted the flower gold as it is priceless. Flowers are priceless.” and he concluded: “This is better than yours isn’t it mummy?”

Mahtab Hussain is a fine art photographer whose work has been exhibited widely and printed in four solo publications. For this project his seven-year-old daughter Honor chose to explore his book ‘Going back home to where I came from’, documenting a journey to Kashmir, from where his parents emigrated. He said:

“Honor has seen this book before but it was the first time I sat her down and explained why I made the series. The connection to her grandmother’s life as a young girl was what kept her engaged. I think she was imagining herself there too.” 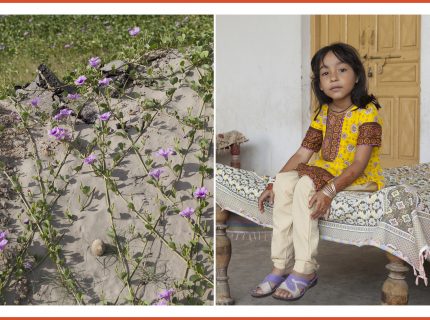 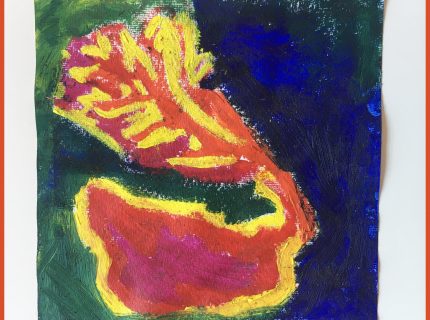 “Honor decided that she wanted to take the book to her trampoline and spend time looking through the series and came back with many questions.”

Honor, age 7, said: “I was looking at pictures in the book and was concentrating on the colours and patterns. I saw yellows, pinks and blues.

“When I saw the picture of the corn on the mat I didn’t know what it was so I asked Daddy. He told me it was corn from my grannie’s farm in Kashmir. I have not been to Kashmir and would like to go as it looks really pretty.

“I made a painting from looking at the book and used lots of colours to make a pattern that I liked in the book.”

Leah Carless works with sculpture to explore making, physical objects and processes. During lockdown she has been making ceramic vessels, using a coiling process, from her kitchen table.

For this project Leah has involved her two-year-old Leonard. Over three sessions, he first used a coil as a ‘Superworm’ (one of his favourite books) then chopped the coil (to make small bees) and then created a toy train crash with the clay. 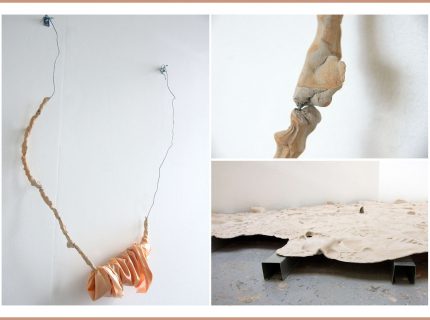 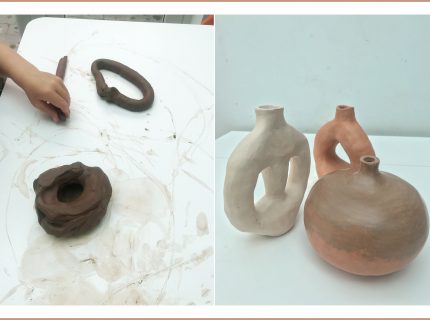 Leah said, “Leonard is now associating things with his own world experiences. Words like ‘remember’, and ‘it’s like’ are very frequent now. During the clay sessions each time he ran upstairs to fetch a toy I could really see the logic in his toy selection.”

“It’s been interesting to see this shift during this project, in fact it’s been this project that has highlighted this development phase to me.”

She concluded, “I feel like we came up with some unusual pairings, not very literal interpretations of my work at all.” 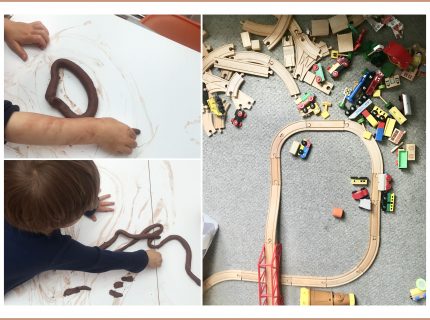 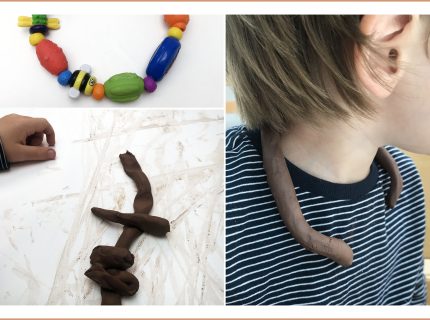