Frank Holl’s Ordered to the Front has proved to be the most popular artwork in our People’s Choice.

Ordered to the Front began as an illustration for The Graphic magazine in January 1879, entitled ‘Summoned for Active Service’.  It illustrated the everyday impact of war on troops and their families.  A detachment of Highland soldiers put on a brave face, while mothers, wives, sweethearts and children are in various states of anxiety.  The accompanying text read: ‘He is aware that every bullet has its billet, but hope springs eternal in the human breast and he somehow feels that whatever may happen to others he will be spared.  But with the soldiers’ womankind – with his wife, his sweetheart, his poor old mother – it is far otherwise.  In their ears the blare of the war trumpet reverberates with the dismal clang of a funeral knell.  Not for them the excitement of the fight; they must stay at home and weep in silence for their departed warrior.’   The illustration showed text behind them on the wall, not visible in the painting, which read ‘Daily Telegraph The Afghan War’ revealing them to be the 72nd Seaforth Highlanders going to fight in the Second Anglo-Afghan War, fought between the UK and Afghanistan from 1878-1880.  Holl painted the subject for the 1880 Royal Academy exhibition, where it appealed enormously to the public due to its patriotic subject matter, the brightly coloured regalia of the troops, and their brave stoicism.  The painting in our collection is a reduced replica of the original, painted the same year.  The fate of the painting which was hung at the Royal Academy is unknown. 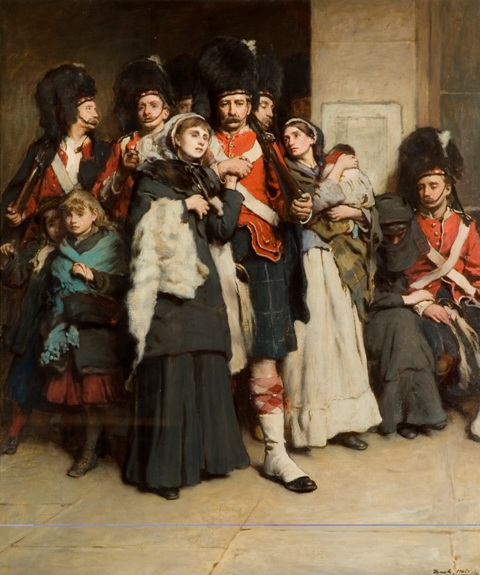 This is the first time the work has been displayed at The New Art Gallery, as it normally resides in the Mayor’s Parlour within Walsall Town Hall, and has done since the 1930s.  The painting was one of thirteen works originally part of the collection of local industrialist and magistrate George Gill which were loaned to the town by his daughter, Mrs Frederick Lonsdale Allen.  After she passed away they became the property of her husband, and on his death in 1954 the works were removed from the Mayor’s Parlour to be auctioned in Birmingham, with the rest of the collection.  The paintings were offered to the corporation for £598, but this was more than the council was willing to pay, their maximum offer being £300.  The works went to auction, however the council was in the end able to purchase ten of the paintings for only £170, including the Holl.  (Another of the group acquired was The New Keeper by Charles Burton Barber, also on display in the People’s Choice exhibition -depicting a young boy, surrounded by spaniels, dressed up in the garb of a gamekeeper.) The works purchased formally became part of Walsall’s Permanent Collection, which this year celebrates its 125th anniversary, and now numbers over 3000 works of art in its entirety.

In the 1960s the Australian Water Polo team visited Walsall and on attending a Reception in the Mayor’s Parlour saw Ordered to the Front.  It was recognised as being the companion piece of a painting in the collection of the National Gallery of Victoria in Melbourne – Home Again, which had been commissioned by Sir Thomas Lucas, the original owner of the painting.

One of my first jobs here as Curator was to oversee the loan of Ordered to the Front to the Watts Gallery in Guildford, Surrey, which hosted a Frank Holl retrospective exhibition called Emerging from the Shadows in 2013.  This exhibition helped re-establish Holl’s reputation as one of the great painters of the Victorian era.  Holl had been accepted to the Royal Academy schools aged 15, and won a gold medal for historical painting in 1863.  From 1864 onwards he regularly showed at the Royal Academy for the rest of his life.  In 1878 he was elected to the Academy and in 1883 became a Royal Academician.  Holl was greatly admired by another of our collection artist’s, Vincent van Gogh, who wrote enthusiastically about Holl’s work and collected his wood engraving illustrations which appeared in The Graphic.  Van Gogh’s Sorrow in our Garman Ryan Collection presents a sombre, tragic female character, and Van Gogh was influenced by Holl’s representations of the reality of working class urban life and the vulnerability of women and children.  Van Gogh described Holl’s work The Foundling in his letters ‘This shows several policemen in waterproof capes who have taken up a child left as a foundling between the beams and planks of a quay beside the Thames.  Some curious onlookers watch, and through the fog one sees the grey silhouette of the city in the background.’

The obvious empathy in Holl’s portrayals of the struggles of the working classes struck a chord with his audience.  Holl’s work was highly respected during his lifetime and his authenticity in portraying the tragedy of loss and parting, such as in Ordered to the Front, were popular with the general public since these bleak themes were sadly subjects they could relate to.  Having come from an esteemed family of engravers, Holl was skilful in his handling of light and dark in his painting, which was influenced by Dutch genre painting, with its directness and simplicity of subject matter.  Holl was a leading painter in the social realist movement of the 1860s and 70s, but when this style went out of fashion in the 1880s he became a pre-eminent portraitist, who was inundated with commissions. Northern masters such as Rembrandt, shaped the direction of his portraiture.

His work is represented in collections such as Tate, the National Portrait Gallery and the Royal Collection, Queen Victoria having commissioned him in 1871 to paint No Tidings from the Sea, from Holl’s first hand observations of a fishing village, and the palpable grief felt in a fisherman’s cottage by his family when he is found drowned at sea.  It is thought overwork contributed to Holl’s death at the age of 43 from heart failure.  He created such an accomplished body of work in his short lifetime, who knows what he may have gone on to achieve. His early death undoubtedly led to a decline in his reputation, but it is heartening that the quality of his work has stood the test of time, and that the British public are still interested and appreciative of his output today.