Keith Piper’s creative practice is research-driven and responds to specific social and political issues, historic relationships and geographical sites. He works across a wide range of media. Piper is perhaps best known as a founder member of the BLK Art Group, who in the early 1980s, were instrumental in confronting the art world to recognise its lack of inclusivity and to build awareness of a growing community of Black and Asian artists. This exhibition however, focuses on brand new works and celebrates Piper’s distinctive practice and continued relevance as an artist who can excite and challenge us. 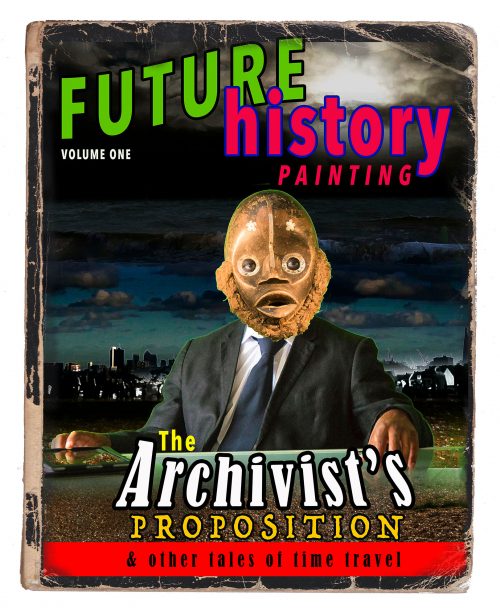 Jet Black Futures is an ongoing project, which, in Piper’s words, “encompasses a number of existing and proposed works, texts and interventions, exploring issues of race, speculative futurism and technology in an age of anxiety.”  The title of the exhibition is deliberately ambiguous. “Blackness” could relate to social, cultural, political and racial categories but also alludes to modernity and technology as well as the absence of light.  Piper alludes to a range of storytelling traditions such as Biblical tales, Greek mythology and science fiction as rich and complex sources of imagery which can be used as bearers of encoded social and political messages.

In Search of Four Horses (2021-22) is an ambitious and epic four-screen video installation based around an exploration of the myth, metaphor and symbolism of the Biblical story of The Four Horsemen of the Apocalypse.  These riders are usually associated with warnings of impending catastrophe.  Animation is combined with the filming of fictional narratives woven with interviews around predictions for the future.

Piper has drawn on this rich metaphorical imagery in previous works, notably The Four Horsemen of the Apocalypse (1984). Here, the Horsemen were articulated as a Tory Voter, A Police Officer, a US General and Ronald Reagan with his finger on the button. This new work is less explicit, tapping into the contemporary social and political context and our wider hopes, fears and anxieties for the future.

At the heart of a multi-layered narrative is Kassandra. According to Greek mythology, Apollo developed a sexual interest in Cassandra and enticed her with the gift of prophecy. When she spurned his advances, he added a cruel twist. Though she would clearly be able to predict the future, she would always be disbelieved and faced with scepticism and mistrust. In 1949, Gaston Bachelard coined the phrase, the Cassandra Syndrome, in which valid warnings are dismissed by others. There is a resounding connection to current debates around climate change, environmental degradation, the mass extinction of species and social and economic equalities. In Piper’s work, Kassandra is the opposite of a hysterical woman whose rantings can be dismissed out of hand. Instead, she takes the role of journalist, rigorously conducting interviews. Her methodologies are scholarly, forensic and systematic. 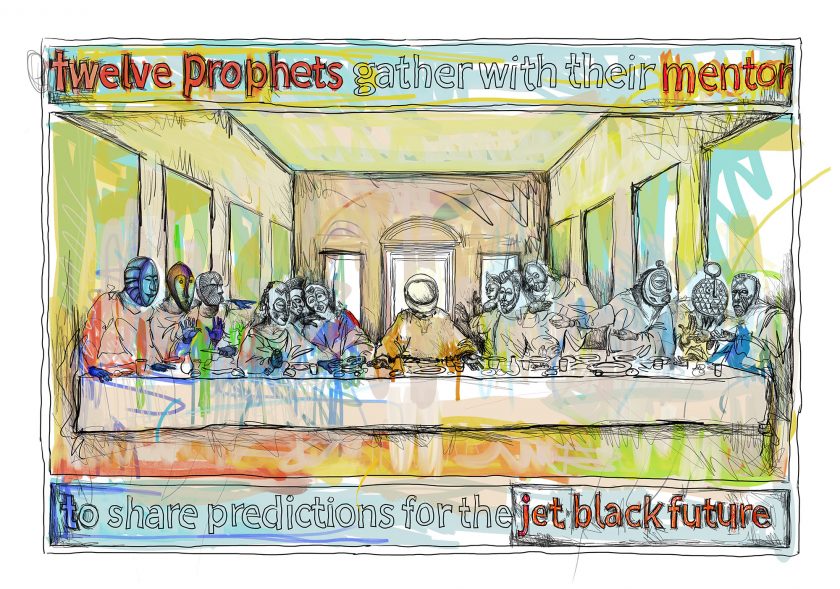 A new series of banners also entitled Jet Black Futures (2021-22) expands and develops the themes explored through this installation. Characteristically, Piper alludes to traditions of storytelling, whether Biblical, mythological or otherwise, to weave together elusive yet compelling narratives. Stylistically, he employs a mixture of painting, drawing and digital tools to create images clearly influenced by the visual language of cartoons, graphic novels, graffiti and memes, and in particular, the works of the late Jean-Michel Basquiat. The use of banners also connotes activism, collective energy and anti-establishment practices.

The exhibition also includes an earlier work, Surveillance: Tagging the Other (1991) which was recently acquired for the Gallery’s Collections through support from the Contemporary Art Society’s Rapid Response Fund. This work was created in response to issues arising in the run-up to the instigation of the European Union in 1992 and was acquired as the impact of Brexit was beginning to be fully realised. The four monitors, installed in a row, show the artist’s head being a target of surveillance and control. His body is scrutinised in terms of ethnicity, gender, citizenship and appearance. The soundtrack features fragments of news reports relating to the rise of racist attacks, anti-Semitism and right-wing tendencies across Europe. Although it was made in 1991, the work remains hauntingly pertinent. The killing of George Floyd in the US has triggered a greater sense of urgency to address social and racial inequalities. The work also connects with wider issues around surveillance and control with the cultural dominance of the internet and social media and the exploitation of personal data to manipulate and monitor. In the context of the coronavirus pandemic, we have all become subject to rigorous measures of control that we could never have imagined. In the longer term, the work bears witness to turbulent times in British history and the struggles for racial equality but remarkably, given recent seismic global events, potential readings of the work have become more fluid and extensive. 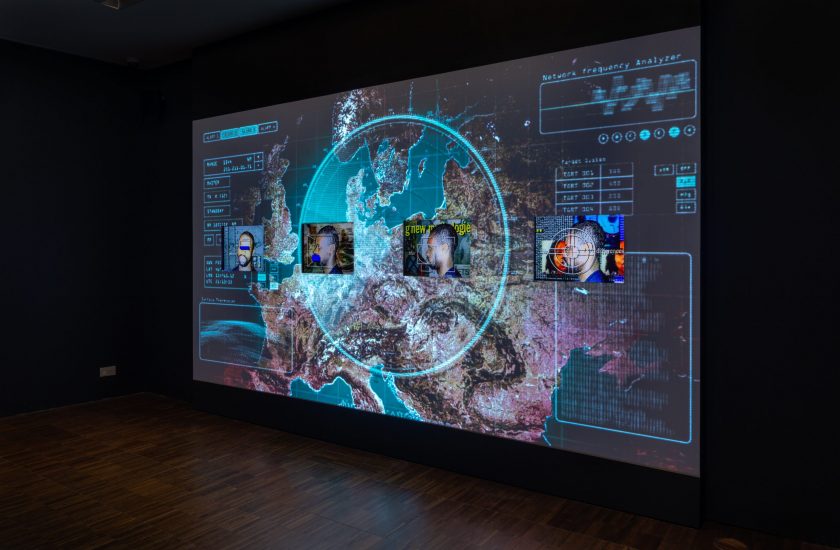 Surveillance is also characteristic of Piper’s “cut and paste” aesthetic. Using early home computers such as the Amiga 500 and then subsequent upgrades to the A2000 and A3000, visual and sonic elements could be collaged together to create powerful and complex works. He has continued to harness the power and potential of technology throughout his practice.

An additional body of existing work included in the exhibition is the series of nine prints entitled Pulp Fictions, originally showed as part of the exhibition Unearthing the Banker’s Bones (2016-17). The prints appear like covers of well-thumbed paperback science fiction books. These are imagined novels which draw on characters and themes drawn from the broader exhibition. Science fiction plays on our fears of infiltration, invasion or disruption and remains a significant influence on Piper’s work. He is particularly interested in the assumed fear of a rampaging “other” which often manifests itself in many science fiction and horror genres as well as political rhetoric.

This exhibition celebrates Piper’s hugely powerful and influential practice. He has a long and significant connection to the West Midlands. Piper grew up in Birmingham with his parents who were part of the Windrush generation. He studied in Coventry, Nottingham and the Royal College of Art, London. He was a founder member of what came to be known as the BLK Art Group which was formed in Wolverhampton in the early 1980s with a range of artists including Eddie Chambers, Claudette Johnson, Donald Rodney and Marlene Smith. Against a context of political unrest and widespread racial discrimination, these artists fought for their place in the art world and paved the way for the career development of many other artists as well as forcing the sector to confront the harsh reality of institutional racism. These enterprising young students were inspired by America’s Black Arts Movement (BAM), part of the larger Black Power movement and closer to home, by renowned cultural theorist Stuart Hall.

This was something of a rallying cry to all Black artists “to discuss the form, functioning, and future of Black Art”.

Jet Black Futures should have opened in Autumn 2020 but was severely impacted by the pandemic. It was rescheduled for Autumn 2021 and then Spring 2022. We could never have anticipated the global events of the past two years, elements of which would have been more fitting, ironically, to a science fiction novel.  As an artist who responds to contemporary concerns, the development of the project has been challenging. However, Piper has risen to this challenge to create this incredible new work.

There is no doubt that Keith Piper has made an indelible mark on the relatively recent history of art. He continues to compel and to challenge us through his powerful and hugely relevant work. It is a great pleasure to be able to share this body of new work alongside some key moments from the past.

Keith Piper grew up in Birmingham and studied in Coventry, Nottingham and the Royal College of Art, London. He was a founder member of what came to be known as the BLK Art Group which was formed in Wolverhampton in the early 1980s with a range of artists including Eddie Chambers, Donald Rodney and Marlene Smith. His initial interests in collage and print media contributed to a pioneering use of early computer technology, not only as a tool for video editing and effects but also for its potential interactivity. Piper works across a wide range of media. He has shown his work extensively with many solo exhibitions including Ikon Gallery, Birmingham, Camden Arts Centre, London and The New Museum, New York. Recent exhibitions include Body Politics at Wolverhampton Art Gallery (2019), Mic Drop at Beaconsfield Gallery, London (2017) and Unearthing the Banker’s Bones at Bluecoat Gallery, Liverpool and New Art Exchange, Nottingham (2016-17).

A publication accompanies the exhibition with essays by Keith Piper and Anjalie Dalal-Clayton. It is published with partners Wolverhampton Art Gallery and Middlesex University London with support from the Paul Mellon Centre for Studies in British Art. 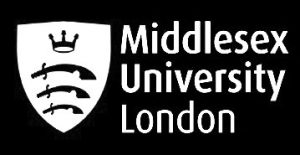 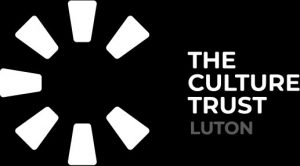